The Pope’s Mandate Regarding Annulments 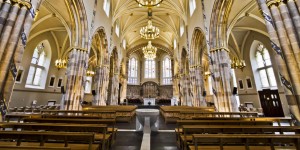 Pope Francis recently ruled that annulments could be obtained by Catholic bishops in a streamlined process that will take a much shorter time than the years-long process that it previously took for Catholics to nullify their marriage after divorce.  Annulments obtained through the church simply allow divorcees to appear before God as if their marriage never occurred so that they can remarry through the church.  The legal concept of annulments, or nullity, allows individuals to “erase” their previous marriage as if it never existed, which is different than the recent Catholic mandate.

This is important for individuals that have divorced but wish to remarry through the Catholic church, as it will make the process far easier and faster.  Currently, Catholics wishing to nullify their marriage must petition the church and undergo a process that may take years to complete.  Pope Francis wanted to streamline the process largely to recognize that in current times, many people end their marriage in divorce. Further, those spouses who were victims of domestic abuse or adultery still found themselves having to undergo the rigorous, expensive and long process to nullify their marriage through the church.

There are two types of ways an annulment can be made by the court: (1) Where the marriage is “void” from the start; and (2) Where the marriage is “voidable”.  Technically, a “void” marriage does not need to have to an judicial proceeding to actually nullify the marriage, although if your marriage is void you certainly would want to obtain an actual court judgment.  Void marriages are those that are not allowed to begin with, including marriages between siblings or other close relatives, and bigamous marriages (where one party is already married to someone else).  “Voidable” marriages are those that the court can nullify after a trial on the merits of the case.  The most common way to obtain a judgment of nullity for “voidable” marriages is on the basis of “fraud”, where one party induces the other to marry him or her on false pretenses relating to the “essence” of the marital contract (i.e. wanting to have children together, etc.)

Differences Between the Law and Pope Francis’ Edict on Annulments

The differences between the change in Catholic rules for annulment and legal annulments can be summarized as follows:

For more information about annulments, click here.  Also feel free to contact our office to speak with us today about your divorce or nullity issue.